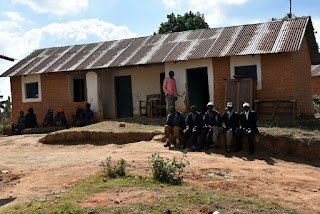 We arrived at Kanikelele at about 3:00.  The people here had been waiting for us for the past two hours.  We had been working as fast as we could, but there were a lot of questions at our two prior meetings and travel on the rough roads is slow.  When we finally arrived we were greeted warmly.

This is the first time that Sandy and I have been to Kanikelele.  Of course, Peter has been here many times and we have read his reports and discussed his visits with him.  Seeing the village ourselves gives us a new perspective. 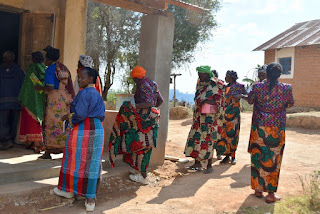 l groups.  They have added 70 new members over the past year and there are still 3 more waiting to get in.  They are a member of the Iringa Hope Joint SACCOS.  Last year they borrowed $13,000 from Iringa Hope.  Using this, together with the capital they already had, they made 80 loans totaling $20,000.  We were told by the SACCOS chairman that the members are very entrepreneurial and that they earned a lot this year. He thinks that they earned at least $60,000; maybe as much as $70,000 or $80,000.  This would mean that the members of this SACCOS earned over $1,000 each. 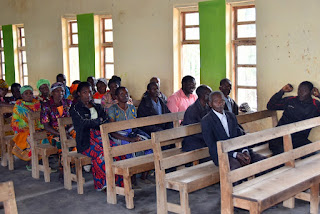 The pastor opened the meeting with a prayer and the chairman welcomed everyone and introduced the officers, board members, and visitors.  When he gave his greeting Tom once again emphasized how the members here own and operate everything about their SACCOS.  He also reminded them that as members of Iringa Hope they also owned the Joint SACCOS and its property, including the car we were driving.

Gideon gave a class on the use of herbicides.  The people here are very interested in this topic because using herbicides means reducing their labor costs. 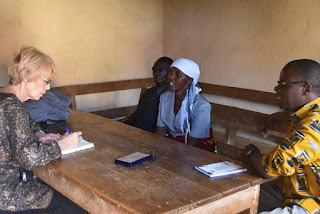 Since this village has gone through three loan cycles, we held interviews with two of the members. The first of these was with Jane Nyagawa, 52 and married with 6 children and 2 grandchildren.  She and her husband have 11 people living in their home.  They are working together to support them all and to send 4 of the children to secondary school.

Before Jane joined Iringa Hope she and her husband were not able to farm using fertilizer.  As a result they could only grow 3 bags of maize (in Njombe they use extra-large bags).  They worked as day laborers wherever they could find work, and in that way they managed to feed their family and send their children to school, but they could never make a profit and never get ahead. 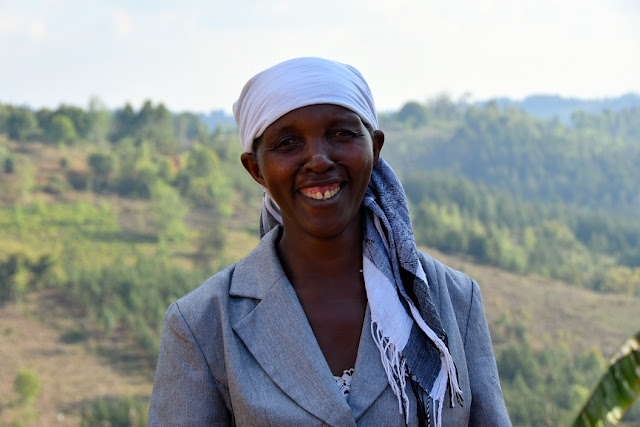 After joining the SACCOS Jan borrowed $250.  With this she bought fertilizer and hybrid seeds.  Her yield jumped from 3 bags to 13 bags of maize. At $45 per bag this is equal to an increase in income of $450. This was enough to feed everyone and have a little left to sell.  The family still worked day jobs, but now they had enough income from farming to feed the family, so their day labor went to school fees and to increase savings, plus they had a little left for other things.

Jane took out a second loan for $500.  She used this loan to buy a second acre of land along with fertilizer and seeds, and in addition she bought 15 chickens and a rooster.  She started selling eggs and raising chickens along with her farming.  Eventually she had 300 chickens, a steady egg business, and a good crop.  She didn’t know how much she earned that year, but the profits were very big. In an attempt to calculate her income, we learned that by the time she sold off 200 of her chickens, she had been selling 6-8 trays of 30 eggs a month, at $4 per tray.  Her 200 chickens sold for $5 per chicken, and her two acres of land produced 26 bags of maize, 13 of which were kept for food, and 13 were sold for $32 per each extra-large bag. Our rough estimate of her gross income was $1,550, so her net income was approximately $1,100 for that year.

Her most recent loan was for $750.  She used some of it to buy a third acre.  She also bought seeds and fertilizer.  She has harvested 39 bags of maize which, at current prices, is worth $1,480.  She is also selling eggs from her remaining 100 laying hens.  Finally, she has started a wholesale fish business.  She told us that once every other week she goes to Njombe and buys $100 worth of fish.  She brings these to the village where she sells them for $200.  Between all of these activities Tom estimated that she and her family will earn over $1,900 this year. We were impressed by her entrepreneurial skill. 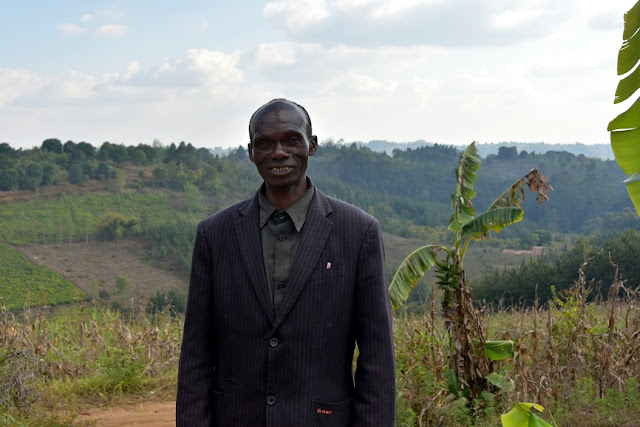 Next up was Gibson Kyelula.  Gibson is 69 and a widower with 4 children and 14 grandchildren.  His son died a few years ago so he has some of his children and grandchildren living with him, making 10 in his household.  He joined this SACCOS two years ago and has taken out two loans.

The first year after he joined he borrowed $100 from the SACCOS. He used this loan to fertilize his 1 acre of land and buy two pigs.  He also used the manure from the pigs on his fields.  That year he harvested 10 large bags of maize worth $450 – giving him a profit of $300 plus two pigs!  He sent two of his grandchildren to secondary school (the others are still in primary school), increased his savings, bought 2 acres of land to plant pine trees on, and one more acre to farm.

The second year he again borrowed $100 to farm his two acres of maize.  The crop looks good so he thinks he will get more than 20 large bags of maize – earning at least $1,000.  With his profits he will again send his grandchildren to secondary school.  He will also buy some seedlings and plant avocado trees on another acre of land.  In a few years his avocado trees should be producing enough fruit to earn $2,000 a year.  His pine trees will mature in eight to ten years and will be worth at least $30,000!  Tom points out that he and his family are on the way to being rich!  He smiles.

This turned out to be a very long, busy day, with several hours spent on some very bumpy roads.  It was 7:00 before we got back to our hotel.
Posted by Tom & Sandy at 8:52 AM