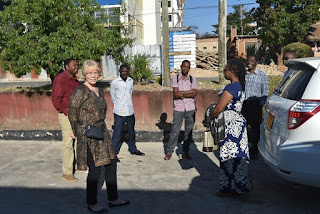 This morning we met the Morogoro Rotarians at their hotel, the New Ruaha Inn, where we joined them for breakfast.  We got an early start to the day with the full complement of MFI staff members.  We were such a large group that we needed two cars.  The young MFI staff members decided that “babu mzee” (old grandpa) should have a driver for the long journey ahead, so in addition to the staff we were joined by our driver, Daniel. Itiweni, Peter Silayo (our SACCOS field agent), Jefa Duma (Joint SACCOS/AMCOS manager), Gideon (our agricultural intern), Venance Msigala (our AMCOS agronomist), Jane and Dynas (Morogoro Rotary club representatives), and Sandy and Tom were on our way to Ukwega at 8:00.

Ukegwa is a 2.5 hour drive south of Iringa town on a dirt road. The road is rough but the scenery is awesome, passing through woods, along ridgelines, up into the hills, and finally to Ukwega.  The road was actually pretty quiet today with only a few lumber trucks and buses.  We probably encountered fewer than five other cars on the entire drive.

We normally come to Iringa in the January-March time period.  That is the tail end of the rainy season so it is green but muddy.  This time of the year we have found most of the landscape brown and dusty.  Still, the Jacaranda trees are blooming with beautiful lavender flowers, and the hillsides are green.

Upon our arrival at Ukwega we were greeted by a large crowd waiting by the new IDC building.  The IDC here was finished in March.  It is already in steady use for meetings, record keeping, storing seeds, etc.  Ukwega has an active SACCOS and AMCOS which are growing and doing well.  There are now 92 families who have joined these co-ops, an increase of 10 from March, with another 15 on the waiting list.

Our first stop at Ukwega was at the Pastor’s house for chai.  We had not met this Pastor before, as he has only been here since March.  However, we did recognize many of the members from other visits and were happy to see everyone.

We made our introductions and then, while the meeting was taking place, Sandy, Peter, Jane and I conducted interviews.

First Sandy spoke with Atrese Kimbavala. Her last name was so familiar to Sandy, and when 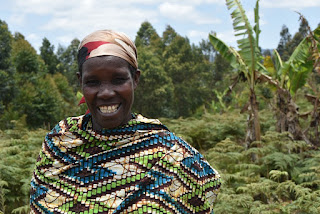 Atrese was asked if she was related to Doricus Kimbavala, she told her that she is his sister.  For those of you who know our early history with SACCOS, you may remember that the first SACCOS that we started was started at Ihemi Parish.  When it started Pastor Doricus Kimbavala texted us from Ihemi writing, “This is the greatest day of my life.  There is great hope here at Ihemi!” That was in 2008 – so what a pleasant surprise to meet his sister and to be reminded of the beginnings of this journey that is Iringa Hope.


Continuing with the interview we learned that Atrese is 45, married, with 6 children and 2 grandchildren.  She and her husband have also taken in 3 young orphans whom they are raising.

Atrese told us that they moved to Ukwega after they married, almost 25 years ago, and from that time they have always rented land on which to raise their crops.  When the SACCOS formed 4 years ago she immediately joined.  She attended classes on how to plan and manage their farm, how to improve their crops, and how to budget and save money.  After saving some funds she made a plan for their farming and took her first loan of $55 for buying fertilizer and seed for raising beans.  That year her profits soared; so she saved some of the money, and used the rest to improve her family’s nutrition and household.

Her second loan was also for fertilizer and seed with similar results, and last year after taking out a third loan, this time for $150, she had a profit of $700.  Combining this with the $300 she and her husband earn from other things, they earned a total of $1,000 – a 3 times growth in a few years!  One of the questions Sandy always asks is “How did you use your profit?” To which Atrese replied that in addition to buying the usual household things, they had bought a 10-acre farm. Sandy asked Peter how to say “WOW” in Swahili to which Peter replied, “WOW.”  Atrese smiled and laughed a little.

Next we talked to Meshak Mgata, 39 and married with 3 children.  He has belonged to the SACCOS 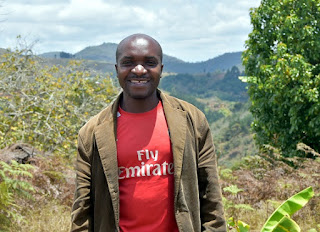 for 3 years and the AMCOS for 2 years.  Meshak told us that his first loan was for $50 which he combined with $75 of his own money to fertilize his beans.  That year his profit from his beans increased to $450.  He used the increased funds to buy nursery stock to plant 20,000 tree seedlings and started a nursery.  He sold 5,000 of the seedlings to pay his bills then borrowed another $200 from the SACCOS to start another batch of seedlings.  He now has 35,000 seedlings which are worth $0.15 or so each (over $5,000 in all).  He plans to sell some trees soon and will probably build a new house and pay school fees.

By the time we finished talking with Mashak, Venance had completed his lesson on the planting of maize so the meeting was ending.  A song started up from the members and they sang and danced their way out of the IDC warehouse.  We said good bye and headed down the road to Ipalamwa.
Posted by Tom & Sandy at 12:17 PM