Today we were off to the Njombe region to visit our locations there.  The Njombe SACCOS are being funded by the Western Iowa Synod (WIS) of the ELCA.  We currently have three locations for WIS and are opening a fourth.  We have been to Njombe before, but we have not visited all of these locations.

The Njombe Region is adjacent to the Iringa Region, and is usually  a fairly smooth four-hour drive on the paved road heading southwest of Iringa Town. This summer, however, the road is under construction so we drove on dusty, rough diversions for much of the way. Uhambule is located another 30 minutes beyond the main road, again on a dry and dusty dirt road.

Uhambule is an old congregation.  It was started in 1943 by a German missionary.  It was perhaps the first Lutheran church in this area.  The parish itself has about 1,100 members with 600 or so at the main church.  The pastor here is new, having been ordained about a year ago.  He is very interested in learning about Iringa Hope and our work.

We arrived in Uhambule about 1 PM.  We were surprised at how hot it was (about 90).  We had checked the weather forecast for Njombe and found that the high was supposed to be about 63.  We learned that Uhambule is much lower than the city of Njombe and therefore much hotter.  The main crops here are maize and sunflowers, but they often have spotty rains and uneven yields.  The area today was very dry and windy.  The dust was blowing and it was hard to see very far.

The first thing we did was have tea with the officers.  The Uhambule SACCOS currently has 61 members.  It was just registered and started making loans with a 1-year term at 2.5% per month.  Their members all pay five- months’ worth of interest “upfront.”  This allows them to make more loans.  Tom suggested that they shorten their lengths to nine or ten months so they have time to collect their loans, do their book keeping and get ready for their next loan cycle.  They thought this might be a good idea.

Last year they borrowed $7,500 from Iringa Hope Joint SACCOS (IHJS).  Putting these funds together with their own savings, share sales, etc. they made 44 loans for a total of $13,000.  It looks like they will get 100% repayment this year so, after repaying Iringa Hope plus their expenses their SACCOS should add about $2,800 to their capital.  This year more of their members want loans so they are hoping to borrow $15,000 from the IHJS.

Following chai we went over to the meeting room to talk with our members.

There were about 34 people at our meeting – a good turnout for this size membership.  They introduced their board, their officers and committee members.  The Village government chair was at the meeting.  He is very interested in learning more about Iringa Hope.  Peter greeted the members on behalf of the Micro Finance Institute (MFI), then one by one we introduced ourselves.  Tom gave a short talk about how Iringa Hope belongs 100% to its members.  He went on to emphasize that they run their SACCOS and they make their own decisions.  There were a lot of smiles and proud faces here.

Today Gideon, the MFI’s agronomy intern, gave the lesson.  Venance, our main agronomist, had to stay in Iringa to have his tooth pulled and needs to take a few days to recuperate.

As Gideon started his lesson we went next door to talk with Mynesta Lulenga, the assistant chair. 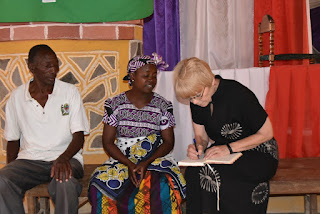 Mynesta is 37, married and the mother of two.  Her oldest is just starting secondary school and her youngest is in primary school.  Mynesta farms 2 acres of maize.  Last year she borrowed $110 to fertilize her fields.  She told us that her fields did not get much rain this year so she only harvested 15 bags.  The prices here in Njombe are much lower than in Iringa, which, as you may recall are also quite low.  She will only get $15 a bag instead of the $25 in Iringa.  Still, there are tariffs and shipping costs to send her crop to Iringa so it is better to sell it here than send it elsewhere.  She is starting to sell her crop now, and thinks she may wind up with a profit of $120 or so. 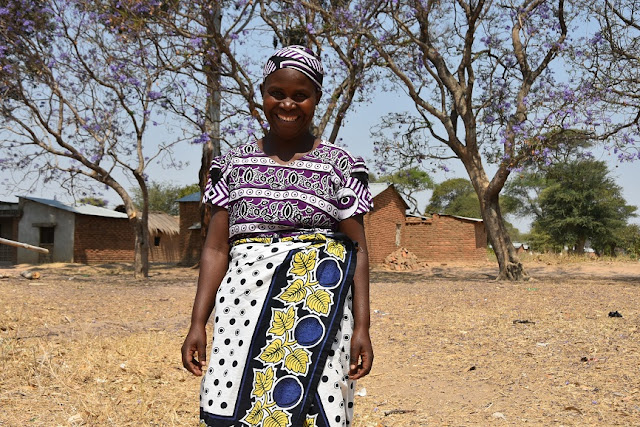 Sandy asked her what the SACCOS meant for her and her family.  She told us that two years ago she could not plant at all.  Before that, she had only occasional harvests and never made much of a profit.  This year the $120 that she has earned will allow her to send her son to secondary school and pay her youngest son’s fees.

She went on to tell us that she also thinks that she did not use enough fertilizer. This is a common problem.  People try to save money by using less fertilizer, not realizing that they lose more in yield than they save in fertilizer.  This coming year she plans to borrow $150 and use it all on her fields.  She has a great laugh and seems very happy. 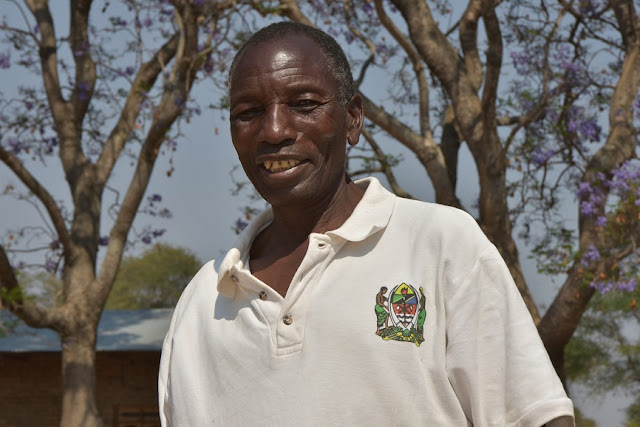 Elisha Mbeni was our next volunteer to be interviewed. He is 67 and married, with 7 children and 11 grandchildren. Elisha has 3 children in college, and he and his wife are helping them with their college fees.  Last year he borrowed $450 to farm his 5 acres of maize.  He too says that the rain he had was not good – but he still got 105 bags of maize.   He is selling his cop now and thinks he will have a $1,100 profit when he has paid all of his expenses.  He smiles as he tells us that he will be able to pay for all of his children’s expenses this year.  One of his children completed college, so he will have only two left to pay for.

How has Iringa Hope helped him?  He was able to buy all of his ag-inputs ahead of time, so he had them on hand when the rains came.  In a season of little rainfall, being able to plant at the most favorable time made a big difference in yield.

Elisha thanked us for helping his family.  We told him that thanks are due to the people of the WIS.
When we went back to the meeting, Gideon was just finishing his class.  This is the first time we have seen Gideon present a class and he seems to connect well with the people in the class.
The chairman asked us to be seated for the presentation of a gift.  Mynesta started beating a drum and the women started to dance and sing.  “Thanks for the SACCOS.  We will grow our SACCOS,” were the words that were repeated while they danced.  When the drumming stopped and the women brought us a gift of eggs and a special type of salt that is from here (it has minerals in it and is supposed to be good for your heart.).

We had lunch at the pastor’s house, then loaded up the car and went to our hotel in the town of Njombe.