Then we arrived at Ilambilole 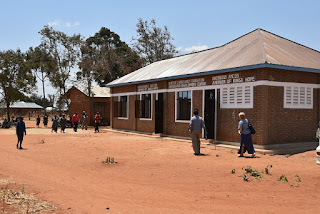 with him.  To our surprise we found that it was stacked with maize 8 feet high!  The chairman told us that they had started taking payment for SACCOS loans with crop.  They are carefully labeling each member’s bags so they know which bags belong to which members (An important thing here in Iringa.  Crops are often graded and sell for different prices so no one wants to be mixed with someone else.)  The warehouse is 2/3 full with 200 extra-large bags of maize.


The chairman told us that the maize will be sold in a few months when the prices rise.  The SACCOS will deduct the loan amount, the interest due, and a small storage fee.  The rest will be credited to the member’s savings account.  They estimate that the member’s will see an additional $7,000+ in profit by doing this. 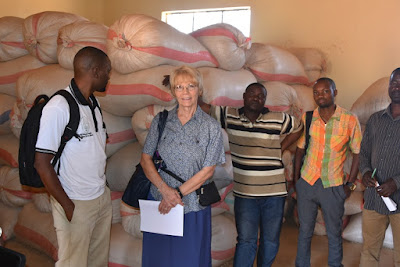 We then went next door to the meeting space in the IDC.  This meeting room is meant for small groups of a dozen or so.  This morning there were 40 people crammed into the room.  Following introductions and a report by the SACCOS chair, Peter suggested that the group reconvene to another area that wouldn’t be so crowded.  As with every meeting here, there were many late arrivals.  As the group filed out to the new space there were still many people who were joining the group.  There 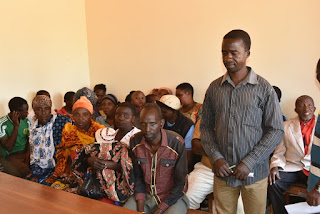 were about 60 people in attendance by the end of the meeting, so it was very good that Peter suggested a larger space.

Venance again held a class on improving maize crops so we ducked out to interview two members.  The first one that Sandy talked with was Judith Filipo Mwendele, 49 and married, with 7 children and 2 grandchildren.  Judith and her husband, Nyalusi, have a daughter who graduated from the University of Iringa with a degree in economics and business, and is now living and working in Dar, along with 3 children studying at the University of Iringa and 3 at secondary schools.  They are helping all of their children through the University while they are sending 3 of their other children to secondary school. 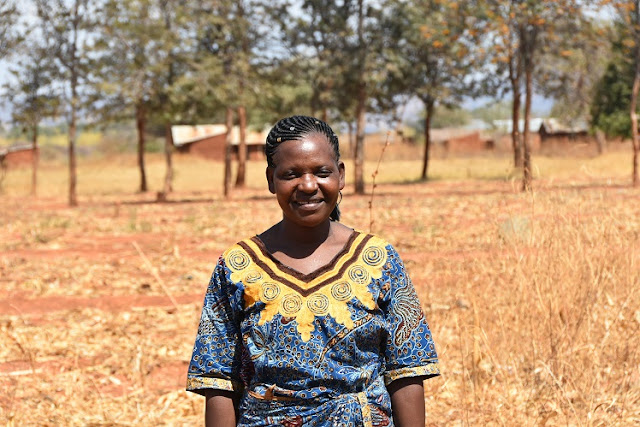 This is one of the oldest SACCOS we have.  Judith has been a member of this SACCOS since it started.  She tells us that over the years the SACCOS has allowed her and her husband to buy land and expand their acreage.  Two years ago she borrowed $450 for fertilizer, seeds, spray and seasonal labor to plant her 5 acres of maize.  The harvest that year was very good so she realized a profit of $2,500!  She used this to help her children go to college and send her other children to secondary school.

This year she again borrowed $450 to plant her acreage.  She is just now starting to harvest her maize, but she thinks it is a bigger crop than last year.  (She is storing some in the IDC warehouse so that it can be sold later for a higher price.  Since she and her husband are sending 6 children to school we think that they need the highest price they can get!)

As Tom took Judith aside to have her picture taken, Sandy sat down with Richard Andefinse Mahali.  Richard is 46, married, and has 5 young children.  He has been a member of this SACCOS for the past 7 years.  During this time he has taken out 4 loans.  He tells Sandy that he has wanted to take more loans, and for larger amounts, but there is limited capital and some years they must take turns.

Two years ago Richard borrowed $200 to farm his two acres of maize. He had asked to borrow $350, but there was not enough capital to do so.  He had a good crop and earned a profit of $450.  He used these funds to buy some goats and five more acres of land.  The additional five acres are located in a different area, and Richard is hoping that by spreading things out, he might have better luck with the spotty rainfall.

This year he has borrowed $350.  His yields this year have not been good so he will only earn about $350 from his loan.  Still, it is enough to pay school fees for his oldest son.

When the class session broke up Tom and the chairman reviewed the records for the past year.  The chairman told Tom that this year was very bad for about half of the members.  The rains were spotty so some did well, and many did not.  Still, everyone made some profit and everyone is paying.  His biggest problem, he told us, is capital.

This year they were able to borrow $15,000 from Iringa Hope.  This, together with $6,000 of their own capital, meant they were able to lend $21,000 to their members.  But the members would have liked to have had an additional $13,000.  Tom reminded him of their first meeting when they were worrying that they needed $400-600 and hoping that someday they might have $2,000 to lend to members.  Now they were worrying about needing many times that amount.  It shows how well the SACCOS is working and how many people are benefiting from membership.

Isn’t it wonderful to be dealing with the issues that success brings to people’s lives instead of worrying about their failure to achieve?  It seems to us that the fact that people’s lives are getting better, their children are getting educated, and they are improving things is a reason to rejoice.  Surely it is a positive development that the chairman can look forward to future growth.


We got in our car and headed back to Iringa.  We will get back before dark tonight! 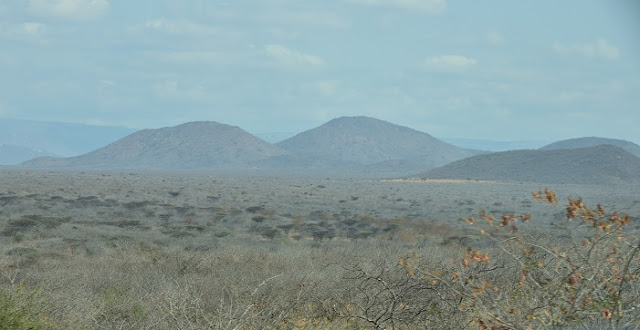