Today we were at Kitapalimwa.  Kitapalimwa is a short 30 minutes northwest of Iringa, on a dusty road. 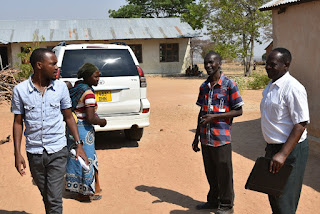 When we arrived Kitapalimwa members were already gathering in our meeting room.  There are a few children playing in front of the building and some goats and donkeys wandering around.  The treasurer greeted us, then invited us into the pastor’s house for chai.  The chairman wanted to give the members a little more time to arrive before we start.  The day was hot and the room was getting hotter as we sat having tea.  Tom decided that tea was the wrong drink for a hot day.  There are almost no trees and the ground is dusty and dry.

During our conversation the treasurer supplied us with some of their SACCOS information.  There are 38 members here, an increase of 3 from last year.  There are 8 more working on joining so they expect to have 46 by the end of the year.  The membership is split evenly between men and women.  They do not yet have an AMCOS but they are working on forming one.

Last year they borrowed $15,000 from Iringa Hope to add to their capital.  They lent $23,000 to their members with an average loan of $500.  They are charging 3% per month and had 100% repayment.  When we visited them last year they told us that there were two other loan programs in their village. 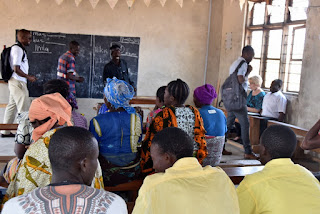 Apparently they have both closed now so Iringa Hope is the only one left.


We went to the meeting room to get things started.  There were 26 people here for the meeting, a good turnout for this location.  They introduced their board members, officers, and advisers.  We extended our greetings, Venance started his class, and we went outdoors to start our interviews.

The people here at Kitapalimwa always have interesting things to tell us and today is no exception.  Yudota Sanga, age 44, is married and the mother of six and grandmother to three. She has been a SACCOS member for three years.  She uses her loans to farm her 7 acres.  Since she has been able to borrow she has hired laborers to help in her fields and used fertilizer and hybrid seeds.  She tells us that before she joined Iringa Hope she had trouble planting her fields and could not fertilize them so her harvest was poor.  School fees were difficult to pay.

Sanga’s first loan was for $250.  She made a good profit that year (she does not recall how much), enough to send three of her children to secondary school and one to university. 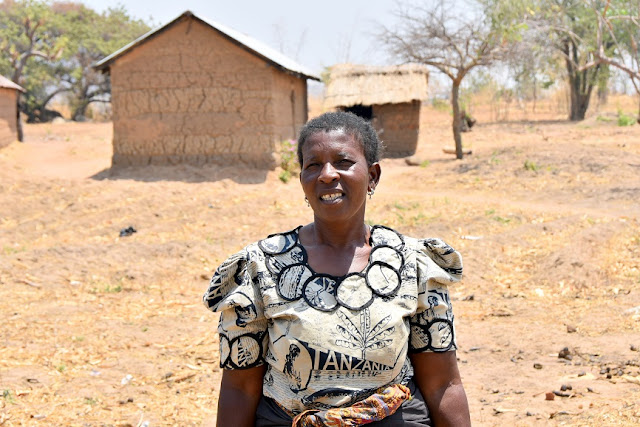 The second loan she got was for $300.  Once again she earned a good profit and was able to pay all of the children’s school fees, her son’s college tuition, and still had enough to increase her savings and improve her household.

Her last loan was for $300.  She planted 6 acres in maize and 1 acre in tomatoes.  She is now selling her maize crop.  The tomato crop was good, but the prices were so low she is letting them rot in the field (we have heard this elsewhere).  When she has sold all of her crop she will have made a $2,000 profit!  She tells us that this is about what she has been earning since she started with Iringa Hope.  It is enough to send all of the children to school, improve her household, save some money, and maybe have a little left over.  She tells us that whatever she earns she always spends on her children first.  Everything else can come later she says. 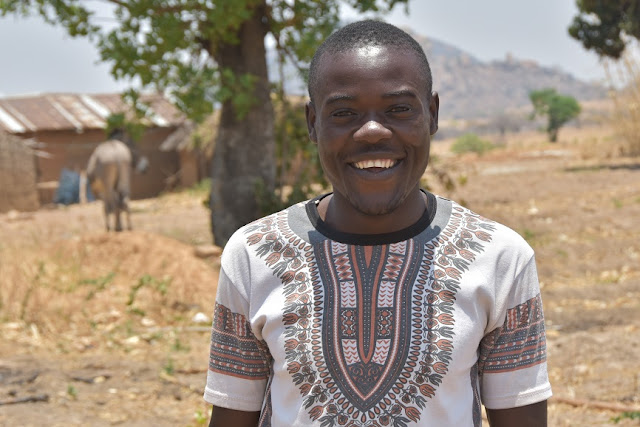 Oscar Kotika was our next interviewee.  Oscar is 24 and a rarity among our members.  We very seldom meet an unmarried man.  Sandy asks him if he plans to get married.  “Yes” he said, “But first I want to build a house so I have a good place for my wife and children.”  He is a man with a plan!

Oscar has been a member here for two years.  He has built his savings up to $150.  His first loan was for $450.  He used this to buy seed, fertilizer, and rent eight acres of land for raising maize and tomatoes.  From the five acres of maize he harvested 118 bags, for a profit of $1,700.   His tomato crop was good, but the market for tomatoes in Iringa was poor.  After selling that crop of tomatoes he took his earnings to Morogoro, rented four acres of land and planted another crop of tomatoes there, because the Morogoro market is more favorable for tomatoes.  (There is a problem with shipping to international markets from Iringa so Morogoro often has better tomato prices.) His total profit from his two tomato crops was about $1500.  He used his profit to buy an acre of land and start building a house.

Last year he again borrowed $450  for ag-inputs.  He planted 5 acres of maize and 2 acres of tomatoes.  Oscar, like many of the farmers we have heard from this year, said that rainfall was poor and his crops suffered. His timing on his tomato crop helped him, so he was able to make enough money off tomatoes to pay back his loan. Compared to last year’s 118 bags of maize from five acres, this year he harvested only 40 bags from five acres. He is holding on to the maize to sell when market prices are higher. If he can sell for 80,000 TZS per bag, which many farmers predict will be the price by December, he will see a profit of 3,200,000TZS or about $1600. 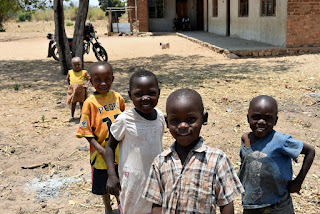 Tom is once again giving candy out to kids.  When he gives to a few, more seem to come out of no-where. He took some pictures of them so they could see for themselves what they look like.  They were highly entertained by the wuzungus (white people) and Sandy had several of them check out her white skin, in apparent wonderment that skin could be that color.

On our way back to Iringa we dropped Venance off at the dentist to see what they could do about his toothache.  (They are going to pull it tomorrow so he will not be going with us for a few days).  We stopped in at the Micro Finance office at the university and came upon a meeting of church leaders.  The Bishop waved us over to greet us.  He told us that Iringa Hope is famous among the various churches in Tanzania.  He said the President of Tanzania wanted to meet us and wondered if we had time?  (Probably not this year) 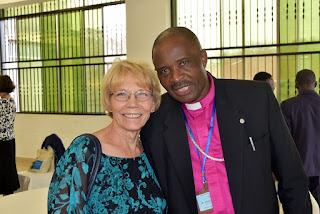 We talked with a few of the many friends that we have in the Diocese then headed home.  Tomorrow we leave for Njombe.
Posted by Tom & Sandy at 9:14 AM