Today we were off to Tungamalenga, which is located 50 miles west of Iringa, on the road to Ruaha National Park.  The road starts out as a good paved road then abruptly turns to a rutted dirt track.  Since it is on the road to the park, it is traveled regularly by buses and trucks.  Since last year it has been regraded is now pretty good.  The traffic jams (mainly cows and donkeys) slowed us down a bit, but we still made it in an hour and a half.

Tungamalenga is one of the locations where we have built an IDC.  The SACCOS and the AMCOS 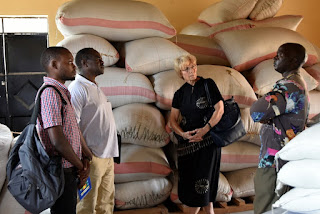 in this village are both very active.  They have already filled the IDC warehouse with 260 sacks of rice and 100 sacks of fertilizer.  Rice is currently selling at a good price – about $40 per bag – but the members of the AMCOS think it will rise to $60 by the end of the year.  If that is right they will collectively earn an additional $5,200 by storing it here.

We talked with their chairman about their use of the warehouse (Absalom, the chairman of this SACCOS is also the chairman of the Iringa Hope Joint SACCOS.).   When asked if the warehouse is big enough, he told us that their SACCOS members would like to store 2,000 bags here, but there is not room.  He had to tell them to stop bringing in their bags of rice.  He told us that the AMCOS is charging members $1/bag for storage and the SACCOs is lending members funds with their bags of rice as security.  He assured us that they were not complaining about the size of the warehouse – they were very, very happy to have the IDC here.

Going over to the meeting house we found a large group waiting for us.  This SACCOS has 73 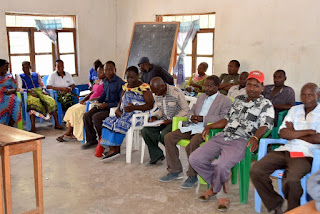 members while the AMCOS has 78.  Half of the SACCOS members also belong to the AMCOS so there is a total of 114 families participating in one or both of these cooperatives.

The meeting got going and Venance began to give his lesson on seeds, fertilizer, and herbicides.  Venance is really enjoying his role with the MFI.  He has never had such a large and enthusiastic audience.  The group asks him question after question on all sorts of topics in agriculture.  Although this meeting lasted almost 2 hours, he says that he would like to come back here soon for another session. 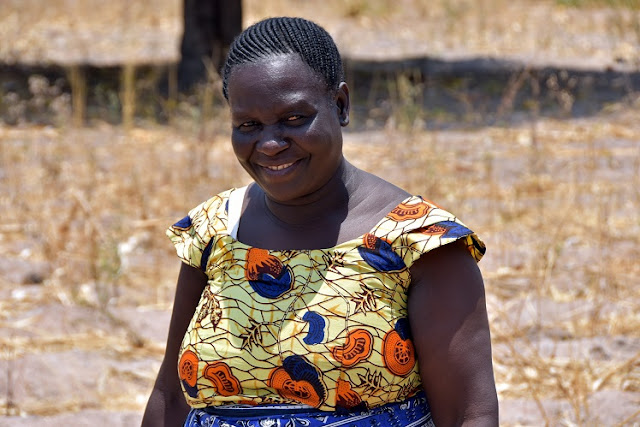 While Venance was giving his talk we conducted interviews with two of the members.  The first person we talked with is Kalmalita Mdegela, 58 and married with 5 children.  She belongs to both the SACCOS and AMCOS.  Two years ago she farmed 2 acres of land.  She borrowed $500 from the SACCOS and planted rice.  The rice crop was very good so she wound up with 84 bags.  Although the price of rice was low, with such a good harvest, she still earned $3,000.

With her profits she paid school fees, bought a tractor, and bought another two acres of land.  This year she again borrowed $500 and planted one acre of maize and three acres of rice.  The rice crop was not as good this year, but prices are higher so between her rice and the maize she has earned a profit of $4,800.  With these funds she bought another 16 acres of land, paid school fees, and still was able to increase her savings!

When asked what the SACCOS and AMCOS have done for her, she replied that before she joined the SACCOS and AMCOS her harvests were poor. The training has taught her a lot about how to manage and plan her farm and improve her farming methods.  With the loans from the SACCOS she has been able to make use of what she learned so she has increased her harvest, and therefore her income, substantially. 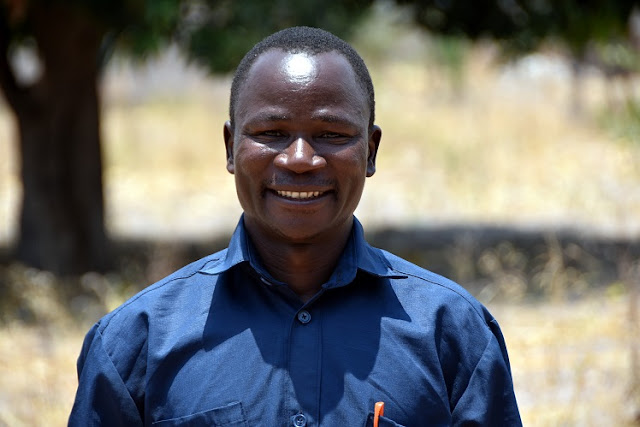 Our second interview was with Andra Mhema, 44 and married with 5 children.  Kalmalita has been a member of the SACCOS and the AMCOS since they started.  He has taken out several loans.  He started small and has grown over time.  Two years ago he borrowed $150 to farm his 2 acres of rice.  That year he harvested 24 bags of rice and earned $750.  His used his profits to send two of his children to secondary school and started to build a new house.  His old house was a 3-room mud hut with a grass roof.  His new house will be brick with 6 rooms and an iron roof.

Last year he borrowed $300 and rented one more acre of land.  He planted mainly rice and a little maize.  The rice harvest was poor with only 24 bags even though he was farming 50% more land than last year, but the prices are very good.  Overall this year his profit is $650.  With this money he has again paid school fees, finished building his house, and opened a duka which his wife runs.

He told us that Iringa Hope has made a huge difference in his life and his family’s life.  Before he joined Iringa Hope his household was very unhappy. His wife was unhappy.  He farmed everything by hand, disliked his house, and saw no future.  Now his wife is happy, his home is happy, he enjoys his new house, and he can look forward to a a good future.

When the interviews were completed and Venance finished his class, we went to lunch with Absalom.  During lunch he turned to us and said, “I want to thank you for having the vision that has become Iringa Hope.  It has changed the lives of so many people here.  Iringa Hope has brought us hope and a future.  Thank you, thank you Iringa Hope.”