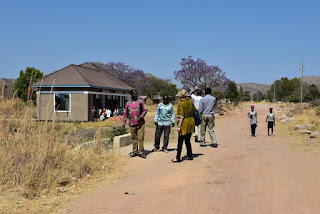 Nduli is located north of Iringa and east of the airport, about two miles down a dirt road.  Approaching Nduli we noticed people walking the same the same direction that we were driving.  Soon we saw the distinct outline of a building that looked familiar – it was the Nduli IDC and a group was gathering there to greet us!

Even though we have not been at this IDC before (it was just completed in March) we immediately recognized it.  The Integrated Development Centers that we have been building are very distinctive in appearance, standing out in a very attractive way from other buildings around them. 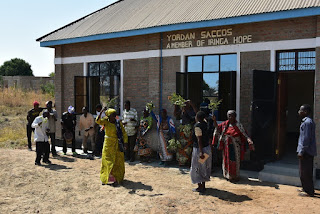 At the IDC the members were singing and dancing when we arrived.  The chairman wanted us to go into the warehouse that was part of the building.  Just as we found earlier, the members of this location are using the warehouse to store some of their crops until prices rise.  At the moment they have 110 large bags (a large bag is 1.5 times the size of a normal bag) of maize stored here.  The chairman expects that they will end up with 170 bags.  He told us that they expect the price will rise another $20-$25 by March when they will sell these bags.  As a result, they expect their members to earn $3,400 MORE than they normally would.  They have all agreed that this increased profit will be credited to their savings accounts so that there will be more capital to loan next season. 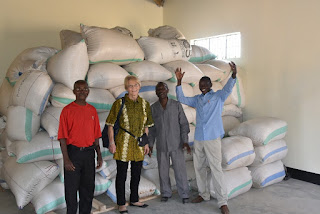 The 50+ SACCOS and AMCOS members that were gathered were too many to fit in the meeting room of the IDC, so an awning had been put in place for us to meet under alongside of the building. The chairman gave us a report on their SACCOS, we introduced ourselves, and the meeting began in earnest.

At this location Venance gave a class on the use of herbicides.  Out of the more than one hundred farmers that belong here, only 4 have ever used herbicides, preferring to hoe their crops instead.  There are however two problems with this.  First, the plants are often damaged when they do this, reducing their crop.  The second problem is 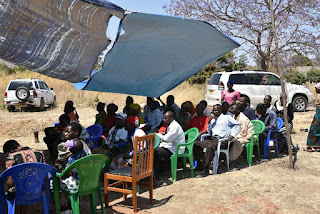 something new to this area.  Since families are getting smaller, and Nduli is close enough to town for the young people to find work there, there is a shortage of people to help with the hoeing!  As a result the fields are being hoed later, further reducing the yields.  Everyone was very interested in Venance’s talk and they had a lot of questions for him.

Sandy’s first interview today was with Mchungaji (Pastor) Medson Chengula.  We first met Pastor Medson when we were working at Itungi.  He moved from there to this parish 4 years ago and joined this SACCOS.  He has taken out loans every year since he arrived at Nduli.  The first year he borrowed $450 to farm the 3 acres of parish land he uses (much as in years past in the US a key part of a Pastor’s income here is the use of the parish farm).  He planted maize and sunflowers.  That year he made a $500 profit from his loan. 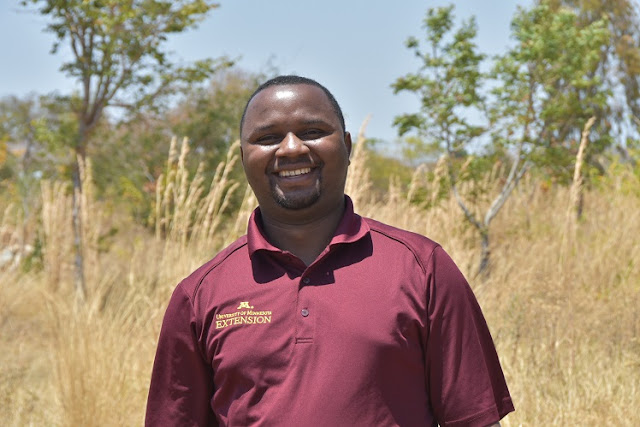 The second year he borrowed $700 from the SACCOS to build bee hives.  He built 24 beehives and placed them in the forest.  By year’s end he had 18 hives working and earned $1,100 from the honey – a $400 profit the first year.  He noted that he still has all of his hives and is earning a steady income every year from them.

His third loan, taken out last year, was for $900 to farm his 3 acres.  The crop on his land was very poor that year. Although he has yet to sell that crop, he expects to earn a $500 profit.  He will also receive an income from the beehives he has.

Pastor Chengula has been increasing his savings and shares each, which will allow him to take out larger loans.  This year he hopes to borrow $1,000.

Over the years he has used his profits to improve his household and currently he is paying college tuition for his wife, who is getting a graduate degree in education. This year he has also bought land in Nduli for a new house he hopes to build.

Pastor Medson told us, “The members of my church have had the quality of their lives improve from the SACCOS.  They have built homes, bought farm land, sent their children to school.  The SACCOS is by far the best way to help people because they can work to help themselves.” 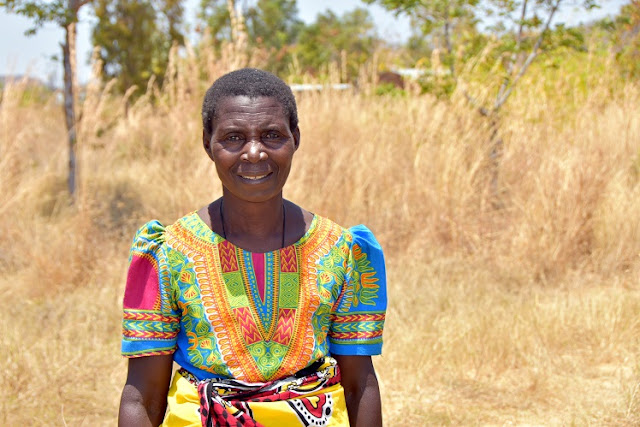 Agnes Mhavile was our second SACCOS member to be interviewed.  Agnes is a 62 year old widow with 4 children and 12 grandchildren.  She has 2 of her primary school-age grandchildren living with her for companionship.  Agnes has been a member of this SACCOS since it first began.  She has used her profits to help her children through school, improve her household, and now she expects to earn enough to build a larger house to live in.

Agnes wasn’t sure how many loans she has taken out, but it has been at least four, she says.  The first time she borrowed her loan was for $150.  She used this to plant sunflowers and maize on her two acres of land. That year the crops were very bad so she realized only a very small profit.  The second year she was concerned about the weather so she only borrowed $100 and planted very conservatively.  That year she made a very good profit from her farm-about $400.  With her profit she bought 4 goats, paid fees, and increased her savings.  Last year she borrowed $150 again, planting all of her land in maize and sunflowers.  She has harvested her crop and is waiting until the prices rise before selling.  Agnes says she will have earned $850 from her loan.  When she requests a loan this December, she wants to borrow $300.  If she gets this loan she will expand her fields.

After taking Agnes’ picture we went back to the meeting and then to the Pastor’s house for chai, prepared by the women of the SACCOS.  As the meeting broke up the members started singing and dancing again.  Sandy asked Venance about the lyrics to the song they kept singing.  He said it was a sort of praise for SACCOS.  “The SACCOS has kept us from hunger” was one of the main themes of the song.
Posted by Tom & Sandy at 9:17 AM