After leaving Ukwega we headed back down the road we came on and 30 minutes later arrived at Ipalamwa!

We were again met by a group of people who have been waiting for us.  Attendance at the meeting, while fairly good, was only about 1/3 of the SACCOS membership, due to the not-uncommon occurrence of a village funeral.

Once again the meeting started with the chairman giving us a report on their SACCOS and AMCOS.  There seems to be an element of village rivalry going on between the neighboring villages of Ipalamwa and Ukwega.  With a brand new IDC building in Ukwega, Ipalamwa is sure thinking that they could use one too!

The Ipalamwa SACCOS has 6,500,000 TZS in capital and has borrowed 15,000,000 TZS from Iringa Hope making 21,500,000 TZS (or about $9,800).  They do not have an IDC here but they emphasized that they REALLY NEED one.  Both of the chairmen asked me how they might get one for their community.  I told them the Joint SACCOS board makes the selections, and my job is to work to find the funds. This seemed to satisfy everyone and the meeting moved on.

When it came time for Jane to speak on behalf of the Morogoro Central Rotary club she spent a little time explaining the Global Grant that we are receiving.  There were lots of smiles and applause for this and people were clearly excited.  This SACCOS, like all of the Iringa Hope SACCOS, needs more capital for their members and hopes to get a larger loan from the Joint SACCOS this year.

After the general meeting, Venance, the agronomist, gave a class on planting techniques for growing potatoes, a crop that isn’t grown often here, but will likely due well in the area.  During his class we conducted interviews with two of the members.

The first member we talked to was Kastori Mtengera, 68 and married with 5 children 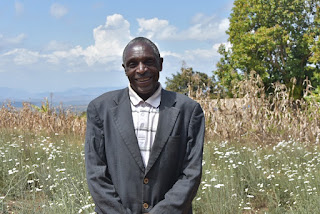 and 5 grandchildren.  He has a sister who is ill so he and his wife live with her.  Kastori has belonged to the SACCOS since it started and has taken out 3 loans.  His first loan was for $40 which he used to fertilize his beans.  After repaying his loan he had a profit of $175, which he used to complete a brick home they had been working on.  His second loan was for $45.  Once again he used this to fertilize his beans.  This time, after repaying the loan, his  income had increased by $150.  He and his wife decided to build another house so they will have one to rent, so this profit started another building.  His last loan was for $48 which he again used for his beans.  This year his profits increased by $189 which will be used for the new house. 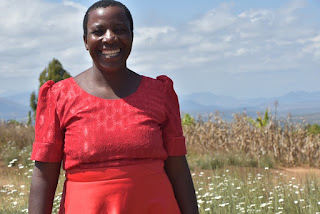 We then talked to Scola Kadinde, 35 and married with 4 children.  Scola has 2 children going to a public secondary school, 1 child in primary school, and 1 in preschool.

Scola has been a member of the SACCOS here for 2 years.  So far she has taken out 2 loans.  Her first loan was for $75 which she used to fertilize her beans.  This increased her profit by $225.  She used these profits to buy 2 pigs, a bore and a sow, which will hopefully produce a nice litter of piglets in November.  She also paid school fees for her children.  Her second loan was for $125.  Once again, she used this loan to fertilize beans, getting a $300 increase in profit.  She used these funds to pay the children’s school fees and is planning on saving some of the rest so she can qualify for a larger loan this year.

Scola seems a vivacious and bright young woman with well-thought-out plans for her farm loans.  For example, her 5-month farm loan took her through one bad harvest due to climate, and allowed her time and money to plant a second crop, hiring help for expediency.  This second planting gave her a high enough yield to offset the first planting, repay her loan and still see a profit.

After we had talked to these members we went back to the meeting. Things were starting to break up

so we waited outside and talked to some of the people as they left.  People here are very happy with their SACCOS and are working hard to get their AMCOS going as well.  They clearly see these two as having key roles in their futures.

Before we left the chairman asked us to come to the Pastor’s house for chai.  Chai was a full meal with rice, beans, spinach and chicken.  We didn’t need dinner tonight, which is just as well, since we returned to the apartment quite late.


Jane and Dynas are heading back to Morogoro tomorrow morning.  They are satisfied with what they have seen and learned.  They told us, “You have a wonderful, highly competent staff here.  The members are clearly benefiting greatly and are taking care of the funds they receive.  We are very happy with Iringa Hope.”


Needless to say, we were pleased to hear such high praise coming from two very accomplished and successful women.  We are very appreciative that their Rotary Club has taken on the responsibility of supervising and reporting back to Rotary headquarters on the global grant that Iringa Hope received from Rotary International.

Today has been a long and tiring day, but filled with good conversation with SACCOS and AMCOS members, along with excellent reports on their progress.