Yesterday the chairmen of Kiponzelo and Ihemi called Peter Silayo, our Field Agent, and asked if we might reschedule our meetings for today.  It seems the government announced that they were awarding deeds to land around the houses in Kiponzelo today and the members of the SACCOS had to stand in line to get their deeds!  Meanwhile the chairman at Ihemi told us that there had been 3 deaths – the wife of one of the SACCOS members, a member of the Ihemi congregation, and a well-known man from the village.  Funerals here are always held promptly so there would be three funerals on Monday that most of the members needed to attend.  We decided to go ahead with the meeting as planned, since our schedule doesn’t have any “wiggle room,” allowing those who were available to attend the meeting and Venance’s class. 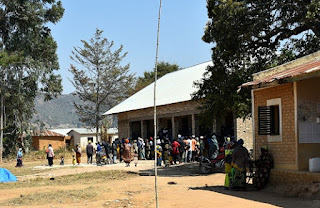 Kiponzelo is 40 miles west of Iringa, the first 32 miles on the highway another 8 miles on a “good” dirt road.

As we drove up we saw lines formed at the government center, waiting for their deeds. Getting deeds to land is a new thing here; most of the homes in the villages do not have deeds for the land around their homes, so getting one is indeed a big deal. They don’t hold deeds to the land they farm either, and would be able to get those today as well.

The SACCOS usually meets in the government building, but since it was busy issuing deeds, we had to meet in the rather small SACCOS office.  We expected attendance to be low, so we would all crowd in.  Kiponzelo has 92 members and we would 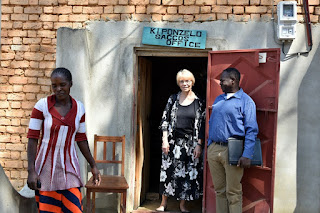 normally expect a little over half of them on a week day.  With the government meeting taking place we wound up with 19 at our meeting, with some coming in late, after receiving their deeds.  We were reminded about how many Tanzanians can fit in a room – always one more!

The chairman here has had a motorcycle accident and could not come.  He has asked if we would please stop by his house so he might greet us.  Since he is not here the Secretary starts the meeting.

Last year the Kiponzelo SACCOS lent its members $11,000; using $5,000 of its own capital and $6,000 they borrowed from Iringa Hope.  With this capital they made 46 loans, leaving 40 people who had applied but received nothing. This year they hope to borrow $12,000 from Iringa Hope so they can give loans to more members.

The chairman of the SACCOS had a motorcycle accident in September, and couldn’t attend, so the secretary opened the meeting. 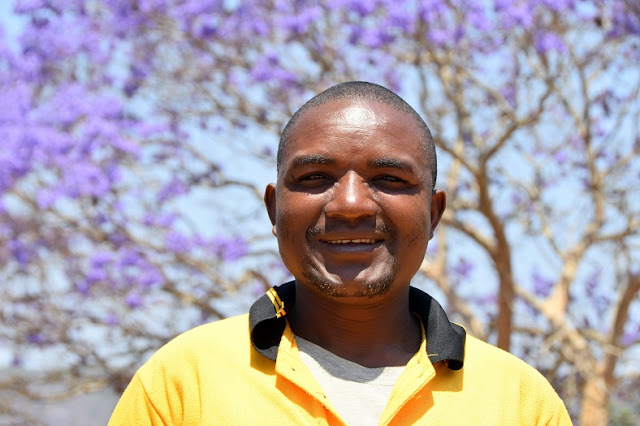 After opening remarks and introductions, we left the office and held our interviews outside.  First up was Msafiri Kavindi, 38 and married with two children.  Msafiri has been a member here for two years now.  He joined after he heard from some other members how they had prospered from their loans.  After joining Msafiri saved $90 at the SACCOS.  He then made a plan and applied for a loan of $150.  With these funds he planted and fertilized ½ acre of carrots.  His carrot crop was very good and he earned a profit of $1,000.  He used these funds to buy a motorcycle (he paid part now and will pay part later) so he could take his crops to Iringa town for a better price.  He also increased his savings to $330 and paid his children’s school fees.

He has now applied for a loan of $500.  He plans to rent some more land and plant ½ acre of carrots, ½ acre of eggplant, ½ acre of peas, and ¼ acre of peppers.  If he gets a normal crop he thinks he will easily pay off the rest of his motorcycle, pay his son’s secondary school fees, and be able to buy the land he is renting. 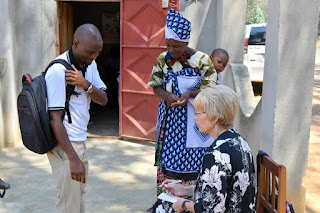 Next up was Regina Bangi, 38 and married with 3 children; Regina has her 3 year old with her today.  Whenever he sees us white folks he starts crying.

Regina has been a SACCOS member for 3 years and she has taken out two loans.  Her first loan was for $200.  She used it to buy fertilizer for her 2 acres of maize and 1 acre of sunflowers.  The maize did very well, but the sunflowers did poorly.  Still, when she had sold her crop, paid her loan, and all of her expenses she had earned a profit of $450.  With this she paid the school fees for her two older children and increased her savings a little. 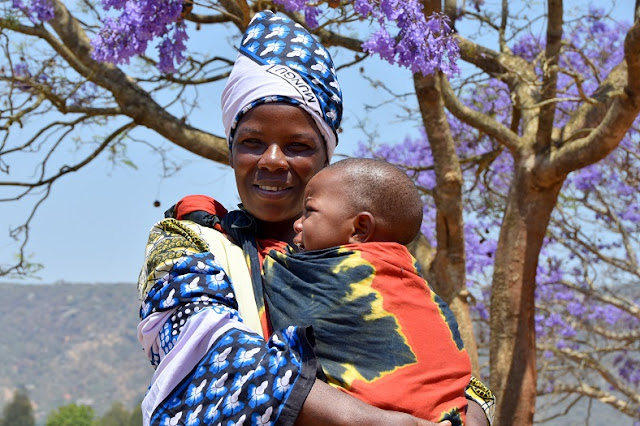 The second loan she took out was also for $200.  The crops this year's were not as good, but she will still make a profit.  She thinks that when she has paid back her loan she will probably earn $400 or so.  She, like many of the farmers we have interviewed, is waiting for the maize prices to increase before she sells.

She hopes to borrow more this year.  She thinks that she can do better by improving her farming practices and is very interested in Venance’s classes. 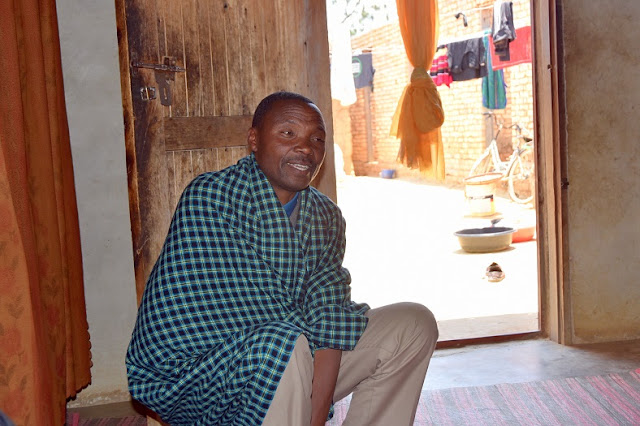 The SACCOS chair has asked if we would please stop by his house so he might greet us.  He pulled out his x-rays for us to see.  He has broken his shoulder in 3 places and fractured his elbow in two places.  He will most likely be at home for a month or two.

After greeting him and wishing him a speedy recovery we left for our meeting at Ihemi.