This morning we went to church at our new partner parish, Usokami.  We have joined a second church in Minnesota so in addition to our long time partner pairsh of Ihemi we now have a second partner parish of Usokami! 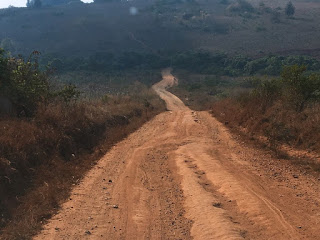 Usokami is located 64 miles from Iringa.  The first half hour of the drive is down the tarmac towards Ihemi.  Shortly before you get there you turn onto a gravel road and head south.  About 90 minutes later you will arrive at Usokami.  The drive is a pretty one, passing through trees, open spaces, and fields.  The road is pretty good – much better than we have been driving on lately.

Leaving at 7 AM we have arrived at Usokami at 9.  We know the new pastor here – he is an old friend of ours from Ugesa, Pastor Pascal Fyataga.  He is a very inspirational leader, but he does not speak any English so we have brought along another friend of ours, Pastor John Mhekwa, to translate for us. 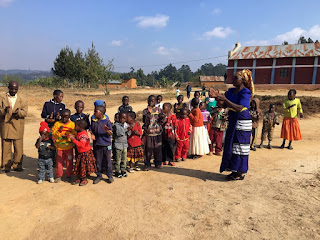 When we got out of our car a group of children and some mamas came running over.  It’s a children’s choir that is singing us a welcome song.  In the background we can hear the congregation singing some songs.  Soon there are a few musicians joining the children and the dancing begins.  Pastor Fyataga gave us a huge smile, hugged us, and told us how happy he was that we were there. He and his family have been living in Usokami for 18 months.

Pascal invited us in for chai and said the people of his congregation would have a good time singing while they waited for us.

Some places chai is just that – tea.  Today, along with sweetened tea, chai consisted of eggs, chapatis, and mandazi (fry bread).  After chai Pastor Fyataga gave us a tour of the new parsonage.  It is nearly complete.  He proudly told us that the people at our new church, Family of Christ, had sent the funds for this and some other projects.  The members of the church have been making the bricks and doing the work on the building so the only cost has been to buy materials.  It is a nice house with a large meeting area for him to host with, several large bedrooms, including one for guests.

A choir lined up to lead the procession into the church.  The procession became quite long, with some dancing figures and 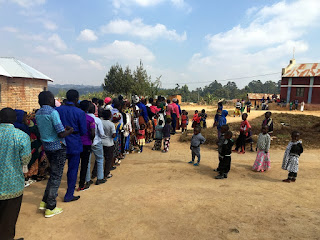 instrumentalists, which were mainly percussion, but also a retired evangelist with a guitar.  When we were touring the house, Pascal asked Tom if he would preach today.  Never one to decline an opportunity to speak without interruption, Tom accepted the invitation.  So he preached.


The church is pretty full, and unlike in Minnesota, late comers sit in the back.  The front pews filled up first.  The congregation, including members of one of the preaching points had turned out to welcome us.  The youth choir sang and danced, the first versus of Psalm 1 were read, followed by a 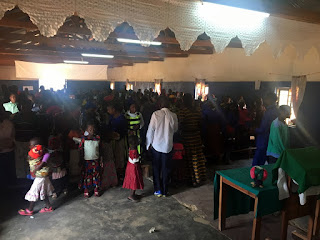 lengthy liturgy, a second lesson from 1st John, and then another choir!  All of the evangelists were in attendance and were introduced to us, along with the church leaders.  Usokami, like most churches here, has a main church where the Pastor lives and several preaching points where evangelists live and hold services.  An evangelist is someone trained by the pastors, and maybe having some classwork, who supports a congregation that is too small for a full time pastor.  These preaching points will gradually grow in size until they are large enough to support and pastor at which point they become a new parish.


Usokami has 6 preaching points.  There are 4 men and 2 women evangelists.  They all welcome us and say they hope that we can visit their preaching points some time.  The pastor tells us that all of these preaching points now have churches with roofs thanks to the gifts from Family of Christ.  However one of the preaching points has grown so much that they are starting to build a larger church there.

Following the introductions, it was our turn to get up and give remarks.  Tom went first, greeting everyone from Family of Christ.  He talked a little about the work we do in Iringa, and mentioned our long association with the pastor.  There was lots of clapping and cheering.  Then Sandy got up.  Sandy knows a lot more Swahili that Tom does.  While Tom’s greeting was very short, Sandy gave a long greeting in Swahili – everyone laughed and clapped and hooted for her.  She went on to tell everyone why we are here and then told the story of how we first met Pascal.  He laughed along with everyone else.  She was clearly a hit. 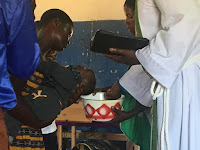 For his sermon Tom’s topic was “Who is my neighbor?”  Pastor Mhekwa read the text on the Good Samaritan from Luke 10. The sermon, including interpreting lasted about 40 minutes, which in the  US may seem like a long sermon, but folks here are used to an hour or more.

Today there were two offerings. People process up and around the offering plate and put in their offerings.  Then there was a baptism.  Gaspar Lulenga was baptized today.  He was very cute and made not a sound when his head was splashed.

Then there was communion, more singing, and gifts!  The congregation gave us some very pretty 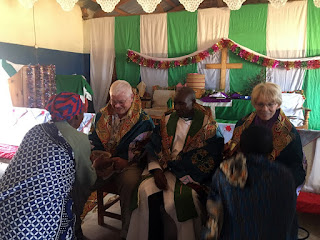 congas and baskets.  The congas had to be danced up and draped over us, then a song and dance took place in front of the altar.  They presented baskets, one for us and the remainder for Family of Christ.

Finally, the service was over – it was a normal 3 hour Tanzanian service, but it seemed much shorter than this.  Today there were some offerings “in kind” so there was an auction on the steps.  There was corn and peas and rice and beans that were being auctioned off.  Tom bid high for some peas and potatoes for Pastor Pascal and some peas for Pastor Mhekwa. Proceeds from the auction go to the church, so a high bid is always welcome.

After the auction the group sang and danced with us back to the pastor’s house for lunch with the parish deacons, evangelists, secretary and pastors.  During lunch we learned a little more about the congregation.  There are 612 members, 235 of whom are children.  175 of them live in town and are largely merchants, lumber traders, etc.  The rest live in the more rural preaching points and are largely farmers.  The farmers here farm about 2 acres.  Most of the congregation earns about $300/year for a family of 6+.

Tom explained what an Iringa Hope SACCOS is and how it works, (during which time Sandy fell asleep). Time will tell if they have the leadership and interest to get one going. 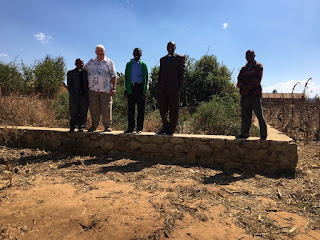 As we were leaving Pascal suggested we stop by the Kilimahewa preaching point and see where they are hoping to build a larger church.  Then he, the evangelist, and the church secretary all got into our car along with us.  The existing church at the preaching point is quite small. There are over 120 members of this preaching point so one can easily see that the small church building can’t hold them all.  They have already laid the foundation for a new church.

When we leave our friends we like to say “tutaonana tena” (we will see you again) instead of “kwa heri” (good-bye). Then we were off to town, and just one more stop for chai with Pastor Mhekwa and his beautiful family. 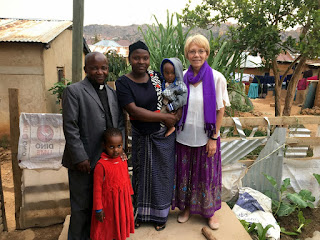