This morning we took a drive to Mgama.  Mgama is about a 45-minute drive west of Iringa.  We followed the main highway most of the way, then turned left on a dirt road (actually a pretty good road) which took us to Mgama. 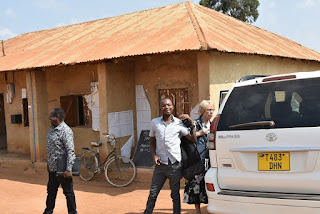 Arriving at what we thought was the meeting place we found no one!  Peter tried calling the chairman but got no answer.  We waited a few minutes wondering what was up.  Just as we were getting concerned the SACCOS secretary showed up to tell us the meeting had been moved to a hall owned by one of the members.

When we arrived at the correct location, we found a good-sized group waiting (48 in all).  The hall they were using was built by a local businessman to be rented for events. He died, leaving the hall incomplete, but it is “finished” enough to serve as a venue for large groups. His widow is a member of the Mgama SACCOS and offered it to the SACCOS and AMCOS for their meeting today. It fits the needs of the group much better than the small room in the government center.

This SACCOS has grown a lot.  It now has 119 members with another 15 wanting to join.  They also have an AMCOS here, but it is still in the process of registering (It can easily take up to 18 months or more for the government to complete the registration.)  Still, almost all of the SACCOS members have also joined the AMCOS so it will be large when the registration is complete.

This SACCOS currently has $6,300 in capital.  Last year it borrowed another $15,000 from Iringa Hope Joint SACCOS.  This last year they made loans to 117 of their members.  As you might guess 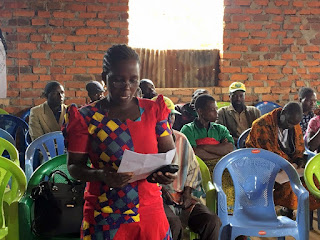 they had only a fraction of what people wanted to borrow so they made the decision to give everyone the same amount.  This amounted to $160 (they were supposed to keep more reserves, but this was noted in their audit and they have learned).  Their repayment rate is 100% - making the third year that they have given loans and the third year they have had a 100% on time, in full repayment rate.

The SACCOS secretary gave a brief report, and then Venance began his lesson.  They had a lot of questions for him.  This is a lively group and Venance was having a good time with them.

Sandy and I went to talk to two of the members.  First we saw Benedict Laiton, 58 and married with 6 children and 4 grandchildren.  He has been a member here for 2 years.  He recently took out his first loan for $160.  This was actually given to him in the form of fertilizer which he got at a 10% discount from the AMCOS.  He used this on his 3 acres of maize and tomatoes.  The crop was good, but the tomatoes this year are only selling for $1.25 per basket.  Since the cost of the basket alone is $1.50 he decided to let the crop rot in his field rather than pick it.  His maize did very well and, with prices not too bad, he will earn a $500 profit even without any tomato sales.   With his profits he first paid school fees for his youngest child, who is in secondary school, and then he and his wife started to build a brick home.  He thinks that with what he has earned it will only take him one more year to complete his new home. 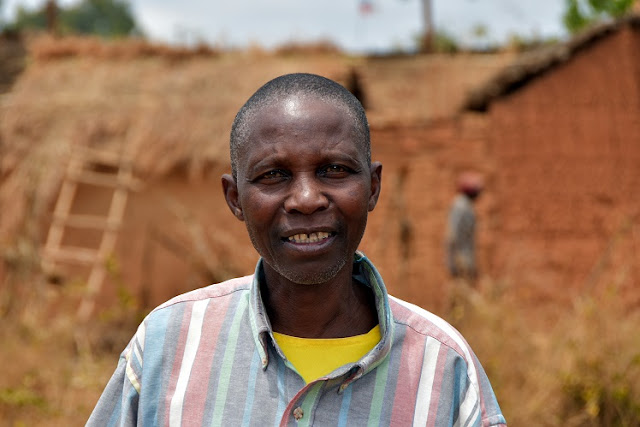 When Tom went off to take Benedict’s picture, Sandy interviewed Lea Kidava, 26 and married with 2 young children.  Lea has been a member here for 3 years and has taken out two loans.  Her first loan was for $160.  She used her loan to fertilize her crop of maize and tomatoes (tomatoes and maize are the main crops here.)  That year the tomato prices were good but the maize prices were poor, so she didn’t make anything off her maize, but earned $350 from the tomatoes.  She used her profit to increase her savings, buy some more shares of the SACCOS, and start a small hardware business from her home. 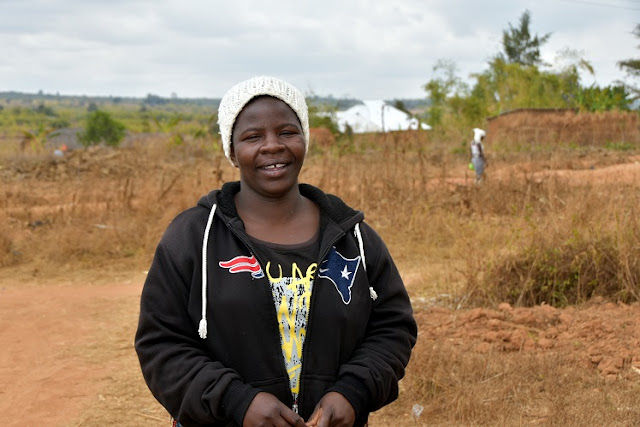 This year she wanted to borrow more from the SACCOS but was limited to $160 by the amount of capital they had.  She planted her fields the same as last year – but as Benedict had noted – the tomato prices were so bad that she too left her crop to rot in the field.  Her maize however has done very well so she will earn a profit of $1,100.  She told us that she plans on buying some more land, saving some more, and starting another business. Her hardware business did poorly because she was unable to sell all of her inventory.  This time she plans to buy a duka (a small shop) where she will sell fresh fish. Her fish will come from Mtera and will arrive in Mgama on the day it is caught. She said that there currently is nowhere to buy fresh fish in Mgama so she thinks she will do well.

Tom went to take her picture and Sandy walked over to talk with some other “wazungus” (white people) that were outside of our building.  It turns out that they are here working on an entrepreneur grant from the UK.  The grant pays for students to come and train young people here in entrepreneurship.  At the end of the program they award some funds to the best ones.  It seems that this is a very small program since there is only enough capital for 16 awards of about $500 each.  They are interested in knowing if perhaps some of their people might get financing from Iringa Hope.  We tell them a little about Iringa Hope and what you must do to get a loan.  They seem to not know much about how things work here and so are surprised that you can’t just go into a bank and borrow funds.  It will be interesting to see what comes of their efforts.

It was a little after noon and we were planning on being in Ifunda at 1:00, so we got in the truck and headed for Ifunda.
Posted by Tom & Sandy at 7:40 AM