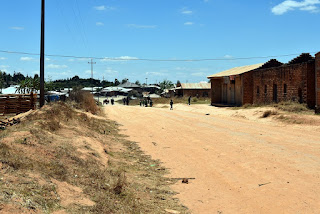 The trip to Ugesa from Iringa town takes 2 hours, the first half on good, smooth pavement, and the last hour on a dirt road heading south. The road travels through pine forests and piles of sawdust.  This is lumber country.

We remember this road as a deeply rutted, muddy wallow.  It was just a few years ago when we found ourselves driving through water past the floor boards, wondering if we would stall out and have to wade to high ground. But in October it is dry, the road has been completely regraded, and is in very good condition.

Yesterday our car developed a leak in the power steering and this morning we had an additional problem in that the hood latch broke so we couldn’t get the hood up.  Luckily our friend Enock Ugulumu from the University was willing to lend us his car.

Once we were on our way, Peter received a call from the chairman of the Ugesa SACCOS, wondering where we were and when we would be there. The members were already waiting for us.  This is really unusual since normally we are on time and everyone else is late.

When we arrived at Ugesa the pastor and the SACCOS chairman greeted us.  The pastor served the

Ihemi parish from 2011 until 2014, so we have worshiped with him several times.  The chairman and the treasurer are also familiar to us from many prior visits and from the training sessions. Looking around it also seems that we know many of the members here from our other visits.

We quickly had chai and then went into our meeting.  About 60 members have waited to see us, and stood and sang as we entered the church. This SACCOS is one of the better run and more active locations that we have.  They have steadily increased their capital and membership to where they now have 127 families.  (They have also started an AMCOS here – but it is only one week old.) 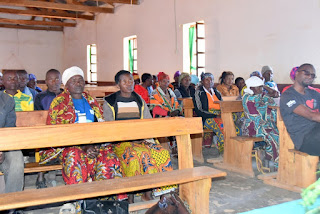 Last year they made loans to 89 people.  Once again they had a 100% on time and in full payment record.  They are expecting to make a $3,000 profit this year and they are asking for a $10,000 loan from the Joint SACCOS so they will be better able to meet the needs of their members.

We complemented them on their excellent work and their great track record, then turned the meeting over to Venance.  Today he is planning on talking about growing potatoes.  Potatoes are the main crop here and are relatively profitable if done correctly.  Venance wants to inform the members of some new strains of seed and how to better make use of fertilizer.

While Venance was doing this we went outside to talk with some members.  The first person we talked with is Judson Mgyekwa, the chairman of the recently formed AMCOS.  Judson is 35, married, and has 3 children.  He has been a member of the SACCOS since 2013 and has taken out about 10 loans. Many loans here are for 3-6 months so members often will take out two or more loans in a year. Thinking that after taking out so many loans it would be difficult and confusing trying to recall the details of his various loans, Sandy decided to take a different approach with him. 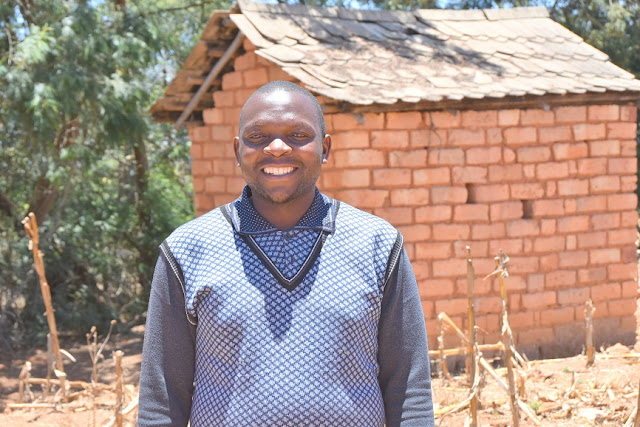 “Tell us how things were for you and your family before you joined the SACCOS,” she said.  “Before I joined the SACCOS we had no house, no farm, no real income.  We just barely got along.” He replied.

Judson explained that a friend had told him he should join the SACCOS-so he did.  He first took out a loan for $150 which he used to rent land and grow potatoes.  That year he earned $710.  They started a house, invested some of the money in a business, and saved some.  Since then he has continued to take out loans; using them to buy seed and fertilizer or invest in his lumber business.  Over the past four years he and his wife have completed a brick home in the country, bought a lot in town where they plan to build another 7-room brick home, bought the family a motorcycle, started and grown a lumber business, bought five acres of land, planting three with trees and two with potatoes.  This year he plans to borrow $550 to plant his crop and improve his lumber yard.  He tells us that between the lumber business, some trees, and his farm his family will have an income of $4-5,000.  He firmly believes that without the SACCOS they would probably still be just getting by.

Next Sandy talked to Anzetye Longo, a 52-year old widow with 6 children and 10 grandchildren.  She too has been a member of this SACCOS since 2013 and has taken out many loans.  Her first loan was for $75 which she used to buy some kangas (a type of cloth) in Iringa to resell here in Ugesa.  She did well at this and has since borrowed to increase her stock, gradually building up her business.  She now has a duka where she sells kangas, pots and pans, and general household goods.  She has bought some land and is starting to build herself a larger shop.  So far she has invested $1,500 of her profits in her business which continues to grow.  This year she will probably earn over $1,000 from her shop. 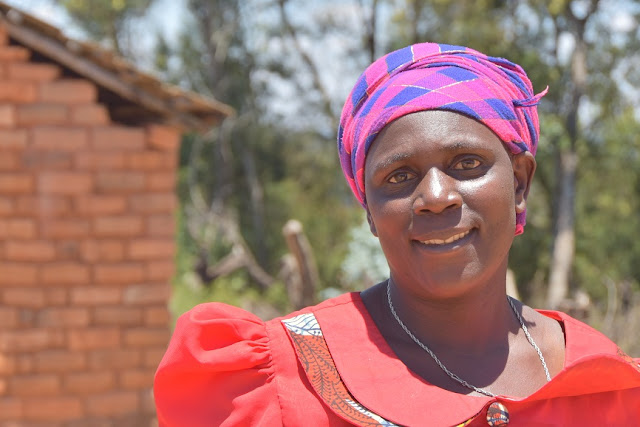 When Sandy asked her to tell us how her life has changed she paused a minute then said, “My life was not good.  We had no food.  My husband had no regular income.  The whole village knew that we were struggling.  It was bad.”  She went on to tell us, “I will never leave the SACCOS because the SACCOS has saved my life.”  She told us that her husband died two years ago, but her life has still improved because of the SACCOS. None of the five older children could afford to attend secondary school, but she has one child left in primary, whom she plans to send to secondary school.

Both of these members’ lives have been profoundly changed by this SACCOS.  It is truly a privilege to meet them and hear their story

Following the interviews and class, we had lunch at the pastor’s.  Tom asked the pastor if the SACCOS had made any changes that he could see.  He told us there have been many, many changes.  In just the last three years, church offerings have increased 30-45%.  The SACCOS members’ incomes have gone up 60-70-80% or more and there are many new homes in the parish.  Many, many more children are going to secondary school.  He said he can’t imagine not having the SACCOS in Ugesa.

We are always impressed by the people here at Ugesa.  They are amazing examples of what can happen when someone gets a chance!